Maria Atilano is the Student Outreach Librarian at the University of North Florida’s Thomas G. Carpenter Library in Jacksonville, Florida. She began working in academic libraries in 2002 as a student employee while studying at the University of North Carolina at Greensboro. Before becoming a librarian, Maria held staff positions as Library Services Specialist in Public Services and Sr. Library Services Associate in Special Collections at UNF. She graduated with her MLIS from Florida State University in 2012. Maria’s professional interests include social media, marketing, student outreach, and instruction. To view Maria’s publications and presentations, please visit her SelectedWorks page: https://works.bepress.com/maria_atilano/

Rachel Cook is the Marketing and Public Relations Manager at the Alachua County Library District, where she oversees marketing campaigns, advertising, and media relations. A lifelong library lover, she joined ACLD in 2019 after working as a director, sales manager, editor, and reporter at newspapers in three states and serving as a communications consultant in Cambodia. She is constantly learning from and awed by her library colleagues. She loves creating and testing new marketing strategies and tools.

Jenny grew up in Clay County and received her undergraduate degree in English from Harding University in Searcy, AR. She received her MLS from Florida State University.She has experience as both a librarian and as a teacher at Harding University, Flagler College, the School District of Clay County, and Daegu International School in South Korea. She enjoys traveling anywhere she has the chance to go, reading, writing, taking pictures, and spending time with friends and family.

Your library provides exceptional services and program, but how do you connect them to users and community partners?  Join us as we discuss and share the various methods of Marketing and Outreach that we use to promote programs, services, and collaborations.  We encourage you to come and share your marketing and outreach triumphs and stumbles so that we can all grow and learn together. 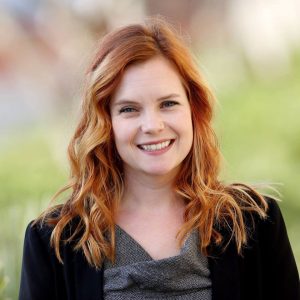 Rachel Cook is the Marketing and Public Relations Manager at the Alachua County Library District, where she oversees marketing campaigns, advertising, and media relations. A lifelong library lover, she joined ACLD in 2019 after working as a director, sales manager, editor, and reporter at newspapers in three states and serving as a communications consultant in Cambodia. She is constantly learning from and awed by her library colleagues. She loves creating and testing new marketing strategies and tools.

I have worked in a library setting since August of 2015. I started as a Student Research Assistant at UNF and discovered my love for libraries and librarianship. I earned my MIS at Florida State University in 2018 while working at a public library in south Alabama. Since January of 2019, I have been with the Clay County Public Library. As the Young Adult Librarian, I research, plan, budget, and implement programs for tweens, teens, and new adults (ages 18-25.) I purchase new materials for our YA sections and work closely with our administration with other collection development projects such as weeding, reorganization, and maintenance. Outreach is another aspect of my job and I enjoy being in the community and working with our school district’s media specialists and other community partners. I also contribute posts and virtual content for our social media platforms. I have been fortunate in my career to be able to work in many facets of librarianship and I hope to continue to learn and grow in the profession.

I work in Marketing at JPL.

I consider myself a visual storyteller and digital media specialist/enthusiast. My Bachelor’s degrees are in English (Writing), Fine Art, and Digital Media (3D Animation) though I’ve dabbled in web design, video production, and more. I just love the different ways humans communicate and express themselves and I love to experiment with different media myself. Before I found myself in the library world, I worked mainly in graphic design and marketing (designing logos and mascots). Working at a small, rural library, though, I tend to wear a lot of hats. So while my main focus right now is programming, grants, and community partnerships, I am also tasked with doing all the marketing/publicity for the library system and I also do a fair bit of outreach. If I’ve ever visited your library (while attending a NEFLIN workshop), I’ve probably taken examples of your brochures and fliers with me. I get a lot of great programming and design ideas that way! It’s also been great to meet so many talented and passionate people. One of my favorite things about NEFLIN are the Interest Groups. That’s probably why I agreed to facilitate the Makerspace Interest Group a few years ago. Currently, I’m the Public Libraries Interest Group facilitator. I look forward to the discussions we’ll have about the profession we all love!

For the last five years, I’ve worked at the Putnam County Library System as the Special Projects Coordinator. One of the first grant projects I worked on was a NEFLIN Innovation Grant in 2015 for a “mobile makerspace.” It also became my Sunshine State Library Leadership Institute project in 2015-2016 (Year 12). For several years, I took several robots, a 3D printer, and a red wagon all over Putnam County (and to several other counties) doing Technology Petting Zoos and STEAM workshops for children and teens. It was all to raise awareness of the importance of STE(A)M (Science Technology, Engineering, Arts and Math) programs in our libraries and schools. In years since, these programs and the makerspace itself has grown with around $100,000 in total grant money.

In 2018, I worked with Marlene Glennon, the PAL (Putnam, Alachua, Levy) Public Library Cooperative administrator, and Jenny Rodgers, my counterpart in Levy County Library System, to apply for an LSTA (Library Services and Technology Act) grant to bring even more “21st Century Skills” to the children and teens of the two, rural counties that make up the cooperative. With it, we were able to purchase student laptops, tablets, and even more robots and coding kits to conduct computer science/coding and robot building/programming workshops. We also used part of the funds to outfit the new “How To Center” (Palatka Library Makerspace). Finally the “mobile makerspace” had a permanent home! It also included an attached recording studio for oral history projects and podcasts. Of course, this was made possible by another NEFLIN Innovation Grant in 2018 called “Every Story Matters.” There are also satellites of the main library’s makerspace in all four library branches. We also applied for a Innovation Grant from the State Library to bring a Google Expeditions virtual reality kit to our two counties. Our VR Experiences last Summer in Putnam County included virtual trips to the International Space Station and the rest of the Solar System! In 2019, we were also awarded a second LSTA grant to continue the work of the first grant and to expand our current programming to include “Life Skills” or “adulting” classes. So, now we’re offering basic sewing, cursive writing, resume writing and interview skills, and more.

In early 2020, the How To Center grew once again to include the Frank V. Oliver Jr. Adult Literacy Center with private tutoring rooms. This is thanks in part to a local grant from the Community Foundation of Northeast Florida. Of course, most of the Frank V. Oliver, Jr. Fund for Putnam County will be used to bring back Adult Literacy Services to the Putnam County Library System after almost two decades. Tutors are being trained and adult learners are being recruited with services scheduled to start soon in three of the five library branches. Services/programs will also include ESOL, computer literacy, health literacy, and financial literacy.

The very first/original library building in Palatka had a fantastic inscription above the entrance. It read, “Knowledge is power.” The programs I work on and the work that so many of us do are all about empowering people. That’s why I love libraries. And that’s why I’m so glad I find myself working in them, along so many of you. It’s all about information and making sure everyone has access to information and the ability to use that information to make their lives better.